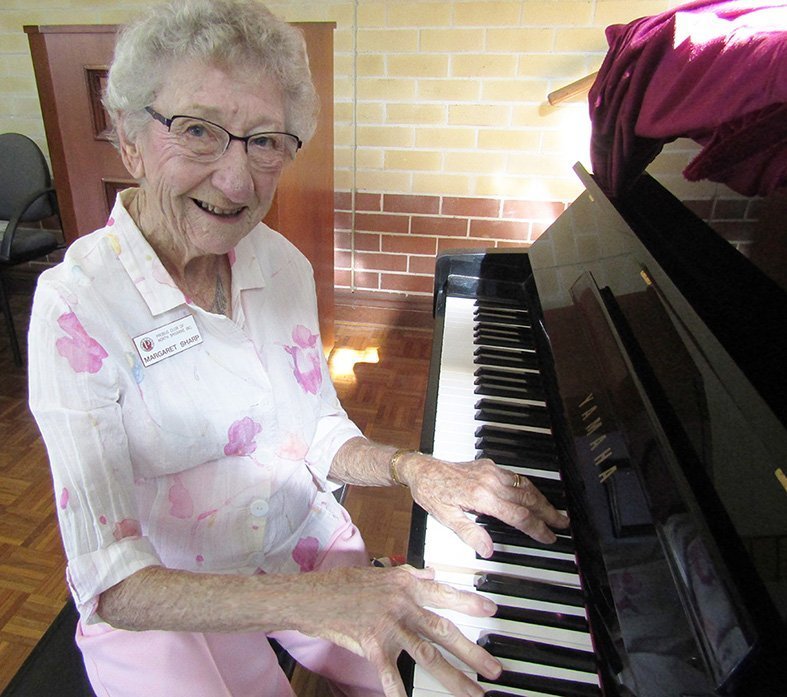 Margaret Sharp has been playing piano for over 85 years so when she moved into TriCare Compton Gardens Retirement Community it was only reasonable that she brought her beloved Pianola with her.

“I initially gave the piano to my daughter to look after but I missed playing so much I decided to bring it with me.

I live in a two bedroom villa so my Pianola now resides in the second bedroom. The removalists worked very hard to get it in!” said Mrs Sharp.

Having learnt piano from the age of 5, Mrs Sharp now plays regularly at Village events whenever the need arises and says most of the music she plays is at least 30 years old.

“We all like songs that have a lot of melody and anytime the Village wants a few notes I am happy to play.”

Originally from Wavell Heights, Mrs Sharp made the decision to move into retirement living 18 months ago after having knee surgery.

“I thought I don’t want to get lonely in my old age. My friend and neighbour from Wavell Heights and I both decided to downsize at the same time.

After looking at several places we decided TriCare Compton Gardens was the perfect fit. We bought separate villas and haven’t looked back.”

Mrs Sharp has always lived an active and full life and feels that TriCare Compton Gardens is an extension of this.

“I worked as a registered nurse in a doctor’s surgery for 14 years before retiring at 64.

My husband and I enjoyed nature and bird-watching so we both decided to become volunteers at the Brisbane Botanic Gardens Mount Coot-tha.”

She retired from this position to take up the Presidents role at the ladies section of the Wavell Heights Bowling Club in 2012 for a number of years.

“I still play there, but not as regularly.”

Since moving into TriCare Compton Gardens, Mrs Sharp has bought herself a tricycle to keep fit and stay mobile as she no longer drives.

“I ride around the Village and bike paths close-by. It helps with my balance and co-ordination, as well as getting me out into nature with the birds and the trees,” Mrs Sharp said.